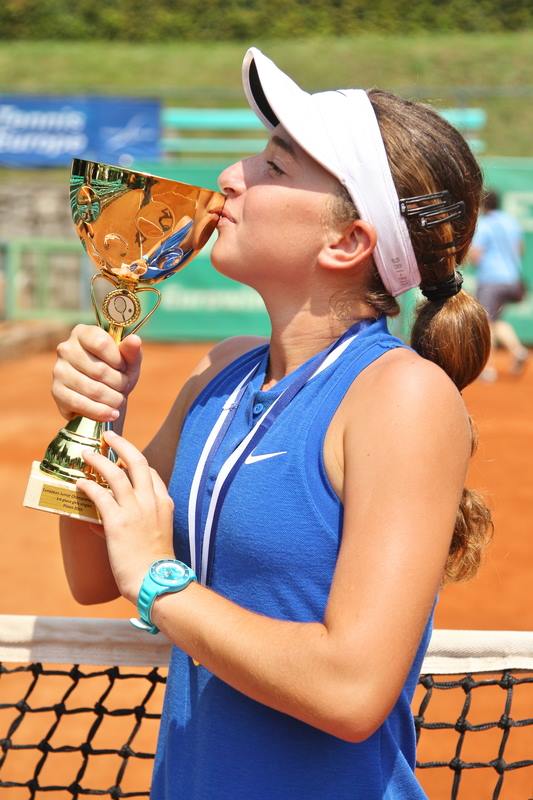 Helene Pellicano has once again etched her country into the record books, this time by becoming the first Maltese player ever to win the under 14 European Junior Tennis Championships.

Helene, who trains at the Brett & Lavazza Tennis Academy in Italy was supported by her mother and father Elaine and Robert along with her coach Fabio Lavazza at the event held in Czechoslovakia.

The final match in Pilsen was relatively straightforward; after a hard-fought first set, Helene, the top seed won eight of the last nine games to seal a 6-4 6-1 win over Czech fourth seed Denisa Hindova, a small measure of revenge for defeat with fellow Maltese player Francesca Curmi at the hands of the Czech in the doubles quarterfinals earlier in the week.

The win was a fourth straight sets victory of the week for Pellicano, whose only struggle came in a marathon semi-final against Croatia’s Noa Krznaric, in which she was forced to battle back from the brink of defeat before securing a 2-6 7-6(4) 6-4 win.

Dr. David Farrugia Sacco, President of the Malta Tennis Federation congratulated Helene Pellicano for this achievement, which is a first in Maltese tennis history. He stated that Helene is Malta’s strongest ever junior player who has already obtained the most prestigious results in winning the Junior Masters Event in 2015 and the European Championship this year. He concluded by saying that Helene’s achievements will help other local players in building up confidence in themselves and furthering their game by competing abroad.